Carl-Henrik and I with painter’s trolley and teal drapery 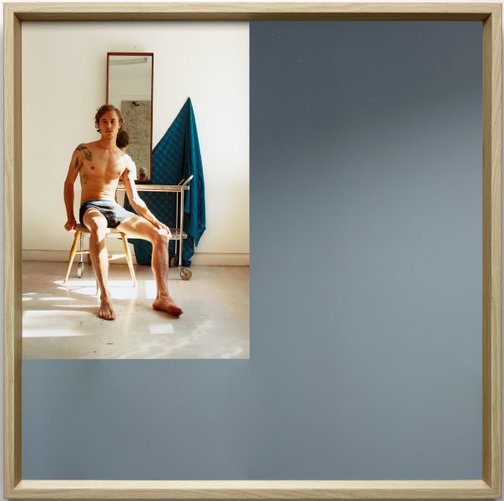 With an artistic practice that is sensitive to the politics of representation, Lyndal Walker scrutinises the rapport between the photographer and their subject. Informed by the logic and stylistic vernacular of fashion photography, Walker’s recent practice can be read as a sustained study of the body and the way it is framed by (and within) an image. Implicit within this is an awareness of the habitual objectification of the female form within conventional pictorial codes. Historically, it is the female body that is exposed by the camera (in more ways than one). But in Walker’s 2015 series The artist’s model, that power dynamic is inverted. Here, it is the male body that we find eroticised and objectified. The inversion is completed when we recognise that the face of the photographer, reflected in a mirror within the scene, belongs to a woman.

The mise en scène of this domestic tableaux, with its drapery, mirror and painter’s trolley, is a coy allusion to the interiors of artist studios as they were depicted in 18th and 19th century painting. In this studio, however, the muse has been recast as a male while a woman assumes the mantle of the master. The conceit is concise but it is forceful. And yet the plot thickens, for Walker has embedded the photograph in a real mirror that casts our own reflection into the frame. The mirrored frame becomes an echo and a duplicate of the one in the image that reveals the photographer and her camera but here, we as viewers are revealed and it is our complicity in the sexualisation of the subject that is exposed.

Purchased with funds provided by the Photography Collection Benefactors' Program 2018