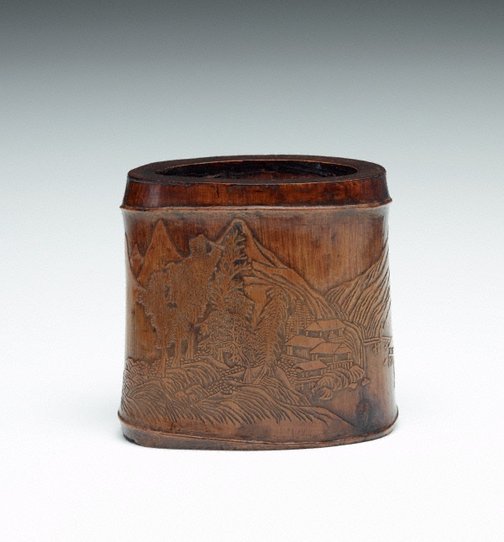 The decorations on both sides suggest this piece was made for a scholar. On one side are the landscape and pavilions resembling a painting; on the other side are imitations of Chinese characters copied from bronze mirrors and utensils. The study of bronze inscriptions was an important pursuit of Chinese scholars as part of the archaism in the 18th and 19th centuries.

On the rim: “Da Ji Yang, Yi Hou Wang” (Great good fortune and benefits to the Marquis) were the words often cast on Han dynasty bronzes for their auspicious meanings.
The first two vertical lines on the right: “Guan Lu Suo Ping” have been found on bronze measuring utensils of the Han dynasty. The rest of the inscriptions are copied from a bronze 'yi' utensil, also from the Han dynasty.