Brush pot decorated with a scene from 'Sima Guang breaking the water urn to save his friend'; a carved Tang dynasty poem by Zhang Ji (c.756-c.779) 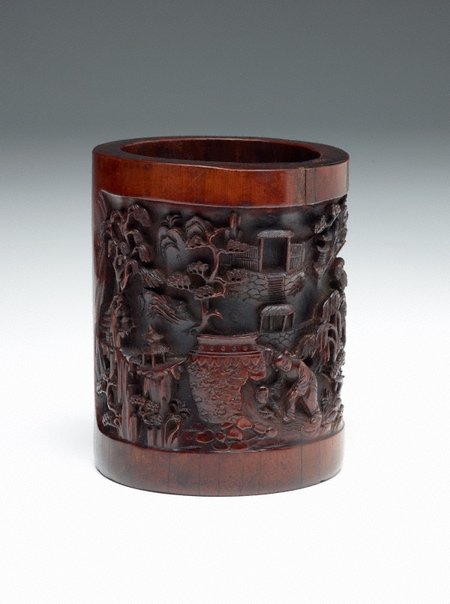 The story behind the carved design relates to how Sima Guang (1019-1086), the famous statesman, historian and writer of the Song dynasty, rescued his friend. When Sima Guang was a child, he was playing with his friends in the village, when one of them accidently fell into a huge water urn from a tree above. As the urn was almost full, the boy was drowning until Sima Guang cleverly picked up a rock and broke the vessel, releasing the water and saving his friend.

The poem of ‘Feng ‘Qiao Ye Bo’was written by Zhang Ji of Tang dynasty (active 1662 – 1722).
The poem reads:
When the moon is down, the raven crows with sky frostbite,
The bank maples and the fishing flares see a sleepless night.
At Hanshan Temple outside Suzhou the bell chimes deep and strong,
Midnight echoes reach the roamer’s boat lone and long.

Brush pot decorated with a scene from 'Sima Guang breaking the water urn to save his friend'; a carved Tang dynasty poem by Zhang Ji (c.756-c.779)