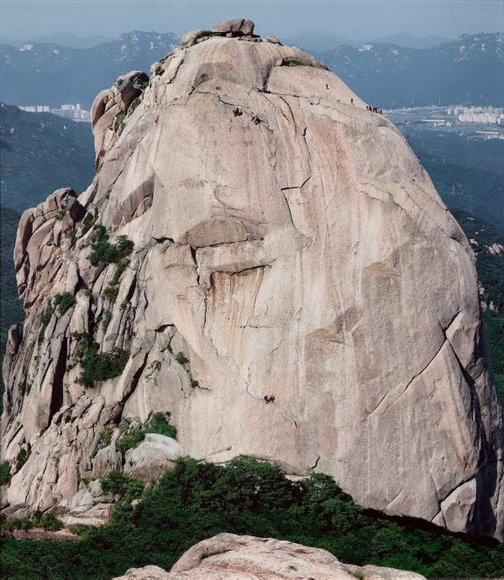 Jae Hoon Lee’s work is centred on the idea of convergence. As a young, multi-disciplinary artist whose practice traverses different geographies and cultures, Lee strives to reconcile diverging paradigms through the power of technology.

After leaving his native South Korea in 1996 to study at the San Francisco Art Institute, the artist moved to Auckland in 1999 to undertake post-graduate studies. Currently he divides his time between Korea and New Zealand.

Lee approaches all his projects from the point of view of a sculptor. Accumulating a range of materials and images from different localities and over a long period of time, he meticulously brings these elements together via digital manipulation.

‘In Su Bong’ 2010, belongs to the latest group of digitally composed photographs. The portrayal of the impressive but benign rock formation near a non-descript urban environment develops into an increasingly surreal puzzle as we notice the seams of the ‘surgery’ performed in Photoshop. The line dividing illusion and ‘truth’ becomes impossible to locate.

Drawn from multiple realities and time frames, this landscape occupies the sphere of the imaginary, yet remains compellingly tangible. The image confronts the audience with the possibility of engineering entirely new realities across time and space. As a metaphorical gesture, ‘In Su Bong’ confirms Lee’s commitment to stimulate a dialogue in which the platitudes of a multi-cultural (in Lee’s case Korean-New Zealander) interface are sidelined in favour of a truly creative approach to cultural exchange and identity.

Following a ‘strategy influenced by Eastern philosophy of Taoism’,1 the artist looks at technology and technological phenomenologies through a refreshingly positive prism. For Lee, the ‘digital space affords other types of networks to emerge, an accretion and also filtration of influences as it progresses along its network, refining, shifting, changing how it is.’2