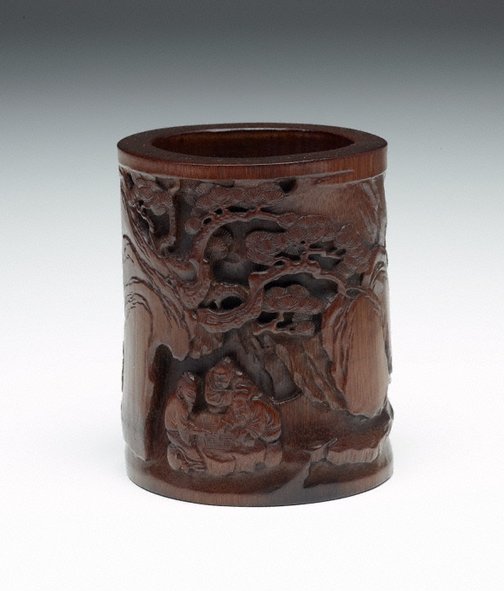 The famous story of ‘Dong Shan Bao Jie’ (Victory reporting at Dong Shan Mountain) depicted here often appears in painting and carvings collected by the literati. Xie’an, the great general and statesman of the Eastern Jin dynasty (317-420) is depicted here as a very determined and confident elderly gentleman playing chess with his friends one day in August of 383. On the right side of chess board, set in a rock shelter with overhanging pine trees, Xie’an stretched out his hand to move the last piece that will decide his victory in the game. Legend has it that at this very moment, a military messenger on a galloping horse rushed to the site with news of the great triumph that their army had won in the battle at Feishui where the enemy forces, many times stronger than Xie’an’s, were routed.

The Palace Museum in Beijing has one wood brush pot decorated with carved scenes depicting the same story by Wu Zhifan (active in 1662-1722), a famous artisan of Qing dynasty.

Starting from the late Ming dynasty, the literati of the day stressed the cultivation of the 'ya' (elegant, refined distinguished) style in their life. This style was expressed in their studies, carved bamboo ornaments, including brush pots ('bitong'), arm rests ('bige') and incense tubes ('xiangtong'). These were highly sought after because bamboo was considered one of the four symbols for 'gentleman' whose integrity should be like the sections on bamboo trunks that go higher and higher.