Untitled (portrait of a man with pipe holding a sculpture) 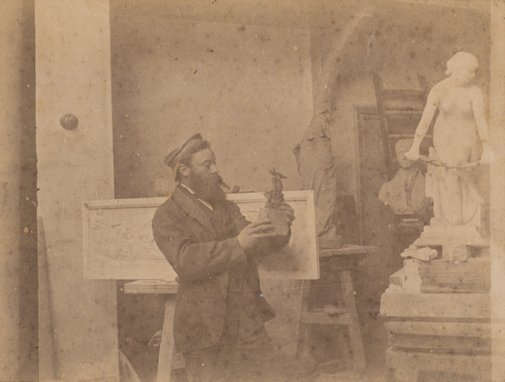 Robert Hellis was born in Clerkenwell, Islington in 1835 and founded a photographic studio in Notting Hill in 1870. Here he established a commercial photographic enterprise that was perpetuated by two of his three sons long after his death in 1895. Hellis & Sons opened more branches than any other studio in 19th century London before being dissolved in 1928. It was Robert Hellis’s wife Gertrude, however, who overtook the original studio after his death while his sons oversaw the other premises. Hellis was also well known as a professor of magic séances. He would perform these séances as entertainment during social events in London.

A cabinet card, like this one, is a stiff piece of card of approximately 15.9 x 10.8 cm that bore an attached photographic print (either albumen, gelatin silver or carbon) and the photographer or studio’s name and insignia. They functioned as a larger format carte de visite, a photographic calling card invented in 1854 by André-Adolphe-Eugène Disderi. Carte de visite technology heralded the mass dissemination of photographic imagery as they could be reproduced easily. The larger cabinet cards became popular in the 1870s and were circulated amongst social acquaintances like the then ubiquitous cartes. The popularity of the medium, however, waned in the 1890s. This cabinet card depicts a man in an artist studio surrounded by sculpture and handling a maquette.