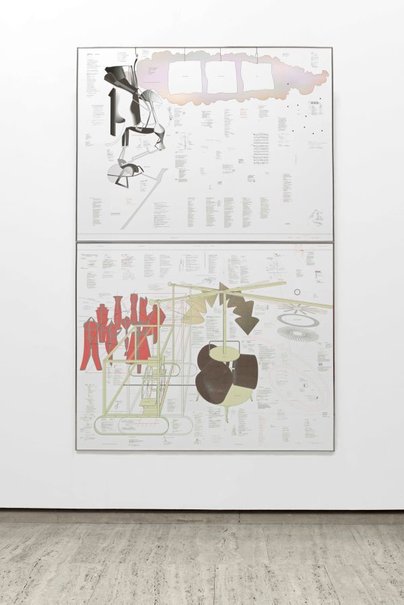 ‘Typo/topography of Marcel Duchamp’s large glass’ is a perfect life-size replica in print form of Marcel Duchamp’s famous 'The bride stripped bare by her bachelors, even' of 1915–23, usually referred to as ‘The large glass’, with all of Duchamp’s notes for the creation of the work inscribed into the image. It is a culmination of Richard Hamilton’s meditations on Duchamp’s work and ideas.

An influential figure in British art since the 1950s, Hamilton played a key role in forming London’s Institute of Contemporary Arts and the Independent group, which paved the way for the pop and conceptual art movements in Britain. For many years Hamilton was a close and trusted associate of Marcel Duchamp, the founding father of conceptual art. Hamilton first met Duchamp in 1958, when he proposed making a typographical version of Duchamp’s famous ‘Green box’ notes. These notes included detailed technical notes on the processes involved in fabricating ‘The large glass’ as well as philosophical and poetic references to the image and its interpretation.

In 1966 Hamilton organised the first British retrospective of Duchamp’s work, held at the Tate Gallery, for which he reconstructed ‘The large glass’ with Duchamp’s permission. In 2000 Hamilton was invited by the Centre Georges Pompidou in Paris to arrange a display of Duchamp’s notes, bequeathed to the museum by his widow Teeny Duchamp and subsequently published in a second collection of the artist’s notes, known as the ‘White box’. In ‘Typo/topography of Marcel Duchamp’s large glass’, both sets of notes have been inscribed onto the replica of ‘The large glass’ adjacent to the part that they refer to, for example the description of collecting dust as a means of colouring the sieves in the bachelors’ domain appear next to an image of the sieves.

Duchamp considered ‘The large glass’ his most important single piece, and it has become one of the most celebrated avant-garde works in the history of modern art. In spite of, or perhaps because of, the copious yet ambiguous notes Duchamp provided, scholars and artists continue to obsessively reinterpret this work. Duchamp also called it a delay in glass and indeed its final meaning is indefinitely deferred as it continues to yield new possibilities at every analysis. Its many possible readings revolve around a complicated allegory of sexual aspiration and frustration as the bachelors’ apparatus in the lower section struggles fruitlessly to impregnate the bride, who hovers in a pink cloud above the horizon, or ‘gilled cooler’, achieving her orgasm with the assistance of a passing breeze.

Browse other works by Richard Hamilton