Geisha in a bath 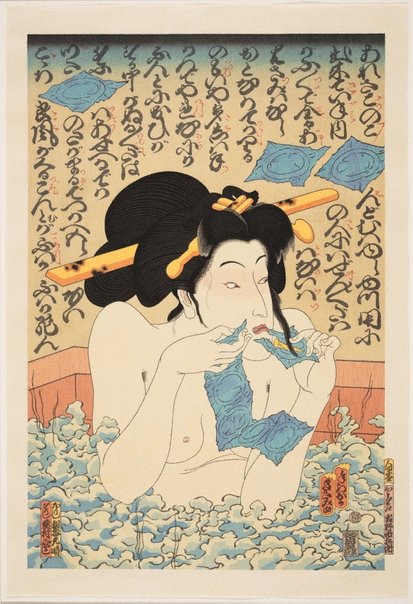 Masami Teraoka achieved notoriety in his early career with his satirical images relating to contemporary issues. With his unique Japanese/American heritage, he drew on the traditional ‘ukiyo-e’ style, exploiting it to capture the viewer’s full attention. Teraoka had moved to Los Angeles in 1961 and made his reputation through his witty prints and watercolours, rich in humour, nuance (often salacious and erotic) and visual and verbal puns. In 1985-1986 he began his 'Aids Series', a series of watercolours and prints on the impact of aids. Amongst his subjects were geisha who seemed to comprehend the urgency of the situation, tearing open condoms with their teeth in their hurry to protect themselves.

This print is based on a 1988 watercolour very similar in composition, but with different text (see ‘Ascending Chaos, The Art of Masami Teraoka’, Chronicle Books, 2006, p. 115).

Masami Teraoka
Geisha in a bath

Browse other works by Masami Teraoka