Model of a granary 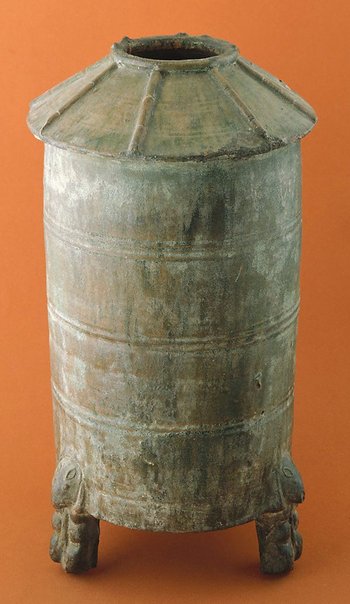 During the Western Han dynasty two new funerary types - the granary model and the granary jar - made their appearance as part of the furniture placed in the tomb of a deceased. The granary model was one of the numerous replicas of watchtowers, farmyards, and so forth placed in tombs and undoubtedly was an accurate model of the solidly built storehouses commonly found on Chinese farms.

The granary jar is related to the often-rectangular granary model. It is usually tall and cylindrical in shape, the ridged roofs projecting slightly over the vertical walls and a round hole in the top. The function of the granary jar was to store a portion of grain for the deceased as proven by the discovery of a group of 20 granary jars excavated from two Han tombs near Loyang (Luoyang) in Henan Province. Several of these jars had characters painted on the exteriors, naming the grains which (judging from the husks they still contained) were stored within. The grains named were 'shu' (millet), 'dou' (beans), 'mai' (wheat), 'su' (millet, of another variety), and 'ma' (sesame), the group as a whole representing the 'wu gu' or "five grains" which symbolise grain in general, or the produce of the field. Clearly the purpose of granary jars was to provide for the deceased the five representative grains on which Chinese agriculture depended (Riley C.C., 'Chinese art from the Cloud Wampler and other collections in the Everson Museum, New York, Frederick A. Praeger, 1969).

The three bear-shaped feet are a common feature on such granary jars. They were evidently popular symbols in the Han dynasty for they are commonly found on tables, trays and even as gilt bronze models. Bears were symbols of strength and endurance, a symbol probably originally borrowed from the myths of North-East Asia.

Model of a granary