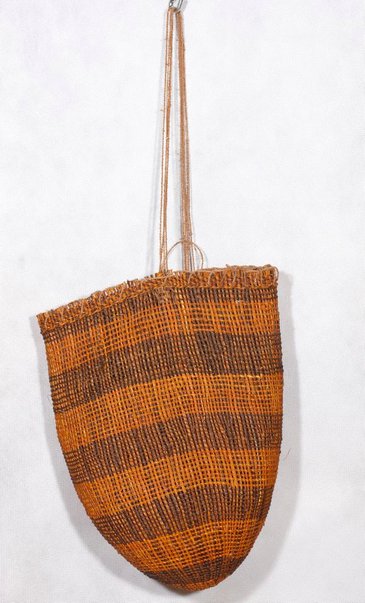 'I used to see these two; Ngarrit'thun and Djutarra, at Elcho and at Milingimbi - we're always been good friends' - Julie DJULIBING, interview with the author, Ramingining, 1990

The Milingimbi-Ramingining area is famous for its woven pandanus mats, bags, baskets and other items, and many widely acclaimed exhibitions and collections have emanated from these communities, which, over time, have come to engage the minds and imaginations of the public. In the post-war period across eastern Arnhem Land a peer generation of women has created an outstanding variety of fibre forms. In Galiwin'ku, Gapuwiyak and Yirrkala, during World War II, school, work, marraige and child-rearing, the lives and friendships of these women have twined and untwined. They moved between making nimble and delicate fibrework, domestic work in kitchens and bakeries, and the strenuous labour of brush clearing for farming, cattle mustering and road work. They rarely attended displays of their work or travelled outside the Territory until the 1980s, when a number of exhibitions prominently featured fibrework alongside painting and sculpture.

In the 1990s, as the elitist distinction between art and craft has been blurred, so a re-evaluation of indigenous woven items has begun to take place within Australia. Fragile fibre objects such as these can be either utilitarian artefact or sacred object depending on the context. In indigenous religious beliefs, the first creative beings carried children and sacred life-giving objects in special versions of bags like these when they created the world. It is said that the first body designs came from patterns left by the fibres on the bodies of the children. Today exhibited as 'art objects' rather than 'trophies', these fibreworks now provide new ways of seeing and enjoyment.