'Stood up' in Swanston Street 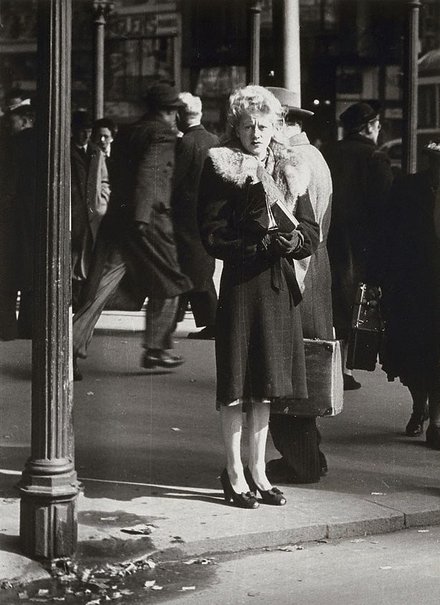 'When I am working with my camera I like to get as close to the object as possible, either physically or by the use of various focal length lenses, so that what I want, fills the viewfinder.' Hal Missingham 1977 1

Taken when Hal Missingham was director of the AGNSW, the lone female figure stands on the curb of Swanston Street probably close to the corner of Flinders Street railway station, a traditional meeting place in Melbourne. Postwar, no stockings but wearing gloves and holding a book she looks perplexed and slightly anxious as her shadow lengthens. She stands, her face partially lit at the close of the day as figures behind her rush past. The narrow fluted support poles emphasise the verticality of image. Missingham's title 'Stood up' suggests a male rendezvous but there are many possibilities for her stationary position. She is captured as a smartly dressed, possibly working, woman before an anonymous lens but perhaps she has seen the photographer who has snapped her in a public place in a private moment. At the time commercial street photographers took pictures of strangers with the hope the photograph would be purchased; this young woman would not have been surprised to see a photographer in the masculine space of the street.

Hal Missingham was born in Western Australia and trained as a graphic artist. He began photographing as an aid to his graphic work. He studied in London and Paris in the 1920s and 1930s and taught there until 1940. After war service with the Australian Imperial Force he became director of the AGNSW until 1971.