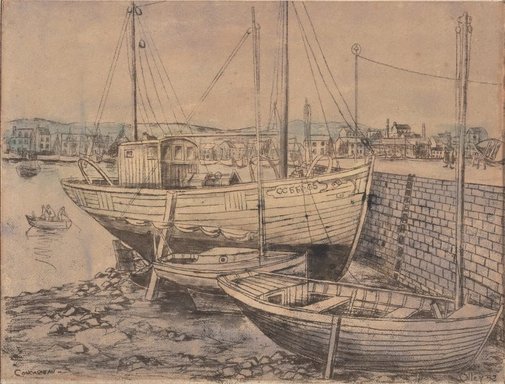 Since the late 19th century, many Australian artists have travelled to Europe to practice, study and view great works of art firsthand. Margaret Olley continued this tradition setting sail for London in 1949. This work emanates from Olley's time in France, when she travelled to the coast of Brittany with Moya Dyring and David Strachan. Though she is famous for her still lifes and interior scenes, Olley produced many works of harbour scenes, such as this one of boats in the fishing village of Concarneau. Olley's interest in marine subjects and in working outdoors and stemmed from her time at the Brisbane Central Technical College, where she would go down to Breakfast Creek in Newstead and draw boats and jetties. She pursued this interest after moving to Sydney in 1943 where she would paint at the water's edge at Lavender Bay.

Browse other works by Margaret Olley 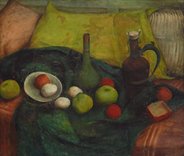