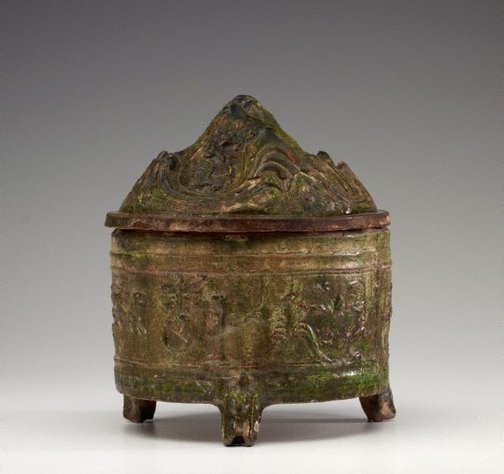 While many jars such as this have been recovered from Han tombs, their purpose is still unknown. They resemble in form the high stemmed, pierced "hill" incense burners and both forms had bronze proto-types - although even the bronze proto-type is considered to be an invention of the Western Han (Watson, W., 'The Genius of China', An exhibition of archaeological finds of the People's Republic of China, London, Times, 1973. p.104). This piece is a typical example of a "hill-jar". Cylindrical in form, it has bear feet such as seen already in the granary jar. The moulded decoration around the body is a new element in the Han ceramic repertoire that adds lively depictions of real and imagined animals either side of two animal-mask handles. The cover is moulded in the shape of mountains piled up to a central peak, with animals and one human figure on the slopes. The decoration on the body of this "hill-jar" is exactly the same as that on one in the Seligman collection (Ayers, J., 'The Seligman Collection of Oriental Art', vol. 2, London, Lund Humphries. p. 28).

The relief of hilly mountains, tigers, other animals, and animal-mask handles is typical of the type of decoration found on these jars. The motif of the shooting archer on horseback was alien to the Chinese mind and was adapted from Near Eastern and Central Asiatic sources.

The cover of the jar is considered to represent the legendary Daoist "Isles of the Blest", regarded as the abode of the Immortals. These "hill-jars" might in fact symbolize the mourners' wish that their beloved deceased reach these Isles and attain immortality (Laufer, B., 'Chinese Pottery of the Han Dynasty', Leiden, 1909. p. 194). That Daoist ideas are included in mortuary furniture reflects the strong influence Daoism exercised during the Han period. The emperor Wu-ti (reigned 141 to 87 BC) is reported to have taken a great interest in alchemy and magic, and sent an expedition in search of the Daoist Isles of the Blest, in the eastern sea, where, it was believed the elixir of life could be obtained. The introduction of the "hill" censers has been associated with the rise of alchemy during the reign of Wu-ti, and the importation at this time of aromatic woods and frankincense from the west, as a result of the expanding commercial relations of the Han empire (Trubner, H., "Arts of the Han Dynasty" in 'Archives of the Chinese Art Society of America', vol. XIV, 1960, pp. 7-43. p. 11).