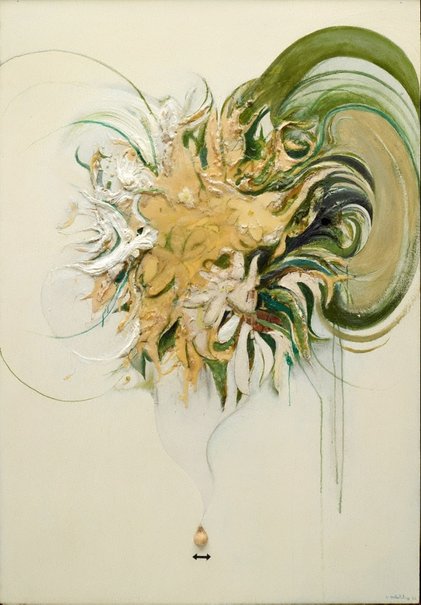 Shortly before taking up a Harkness Fellowship in New York at the end of 1967, Brett Whiteley travelled through Morocco, Majorca and Madrid, where he visited the Prado Museum and studied the fantastic imagery of the Flemish painter, Hieronymous Bosch. Upon returning to London, he completed a number of paintings which would prefigure his epic nineteen-panelled work 'The American Dream' 1968-69, which he completed while living at the legendary Chelsea Hotel in New York.

'Listening to nature' c1967, comprises several elements seen in 'The American Dream': the use of thick resin and plaster to build up the surface; the flap and lobe of an ear; and the inclusion of collage elements; all of which suggest this work may have been a preliminary canvas in which Whiteley tested the limits of his materials.

In this and other works of the period, Whiteley vented his anger, frustration and disillusionment with society around him: exploding, viscous streams of yellow secretions emblematic of the carnage he witnessed in news footage of the Vietnam War.

‘I was determined myself to produce a monumental work of art that would summarise the sensation of the impending necessity for America to own up, analyse and straighten out the immense and immediately seeable MADNESS that seemed to run through most facets of American life’.