Model of a house [with two kneeling figures inside the house] 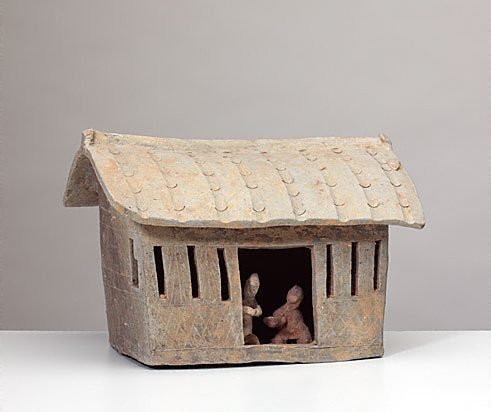 The Chinese belief in, and desire for an afterlife that continued the pleasures and activities of this world is an old one that became popular after the first century CE. Such belief is reflected in the use of clay to make models of houses, attendants, domestic animals, and a host of worldly goods, all of which would be needed and used by the deceased in his or her afterlife.

These two small models of houses (Acc.nos. 132.2002 & 133.2002) were made for such a purpose. They both are rectangular in shape. The roofs are gabled, and on the front and side walls the wooden constructions of the building are indicated by incised lines. Inside the houses human figures and domestic animals are represented: two kneeling figurines in the one house and a dog in the other one. On the bottom are four circular holes, which are intended for the insertion of clay or wooden sticks representing the wooden piles on which such buildings stood.

Judging from the form of the house and the style of decoration, one may infer that these two models were originally from the Guangdong region and datable to the mid or late Western Han period. From the mid Western Han period onward, models of houses, granaries, wells and stoves abound as burial objects in the Guangdong area. These pottery models illustrate many characteristics of the current architecture and the way of living in the southern region. The first type to appear was the elevated "pile-structure" type ('ganlan' in Chinese) wherein people lived on the upper storey, and the lower storey was the shed for domestic animals. This type of model is quite simple in shape, being rectangular with a gabled roof. Later, by the end of the Western Han period, the L-shaped model of a house came on the scene. More complicated examples, such as pavilion-type tripartite mode of buildings, appeared during the late Han dynasty.

The most characteristic feature of the house models from this region is the alternate use of relief and incised line to indicate constructions of the building. Many examples of such house models unearthed recently were illustrated in 'Archaeological Finds from Han Tombs at Guangzhou and Hong Kong', an exhibition catalogue published by the Art Gallery, Chinese University of Hong Kong, 1983.

Gift of Lily Schloss in honour of Goldie Sternberg 2002

Model of a house [with two kneeling figures inside the house]