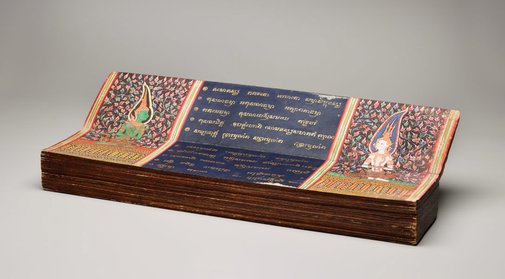 This classic Thai Theravada Buddhist text recounts the experiences of the Sinhalese monk, Malai, on his journey to hell and to heaven. In the form of a poem, it serves as a moralising tale in which the consequences of one’s deeds in this life impact on one’s fate in the next.

The overall message of the Phra Malai is that lay devotees of Buddhism can earn merit by donations to the Buddhist adepts, who are able to convey the gifts of the laypeople to heaven or hell. The alternative is to fail to earn merit, and thereby become a denizen of one of the hells or to descend to sub human life while still on earth.

A dedicatory inscription on the opening folio indicates that this manuscript was commissioned and probably gifted to a monastery as means for the donor to earn merit. The text is written in ‘Khom’, the Cambodian script known only to specially trained monks and which continued to be used for sacred literature even after the Thai script was developed. For those lay people who could not read the text, 16 double page illuminations offered various moralising scenarios to educate readers of the rewards and punishments that, depending on their own moral conduct, could await them. For instance in one illustration Phra Malai is presented with lotuses. In another, celestial being can be seen ascending towards heaven followed by three angels. In another, two adulterers can be seen being driven up a thorn tree by a barking hell-hound while it’s master prods the sinners with his lance.

By the mid-19th century the representation of celestial and royal figures in Thai painting was entirely stylised complete with its own iconography. However, the corruptible individual, still motivated by his/her own desires, such as the two adulterers located in an earthly landscape were depicted in a naturalistic manner that demonstrates an awareness of European pictorial devices.