Study for 'Lapsed shadows re-cycled to a capable coast' 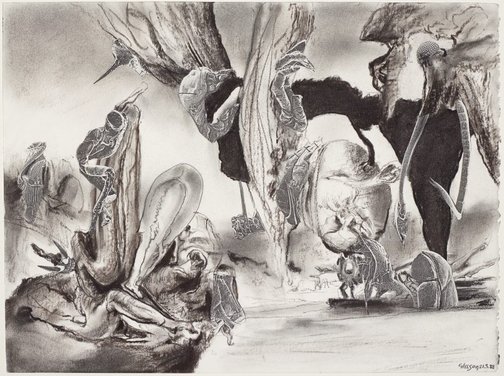 '[It was] done with the idea of the Sunshine Coast, where I used to spend the summer holidays ... I wanted to show how threatening forms can be really quite beautiful ... It's one of those paintings that I did when I was very interested in negative shapes in black and contrasting them with positive, three-dimensional shapes, forms, organic forms ... a feature of a number of works', James Gleeson 17 August 2002.

This drawing is typical of late drawings in which Gleeson uses collage more frequently. He generally begins drawing in charcoal, adding collage subsequently, which he selects from a large collection of random organic and mechanical forms, photocopied or cut from various sources. The identity of the elements he selects is irrelevant to his purpose; they are chosen for their shape and texture alone.