Triangular Mangala Yantra on a stand 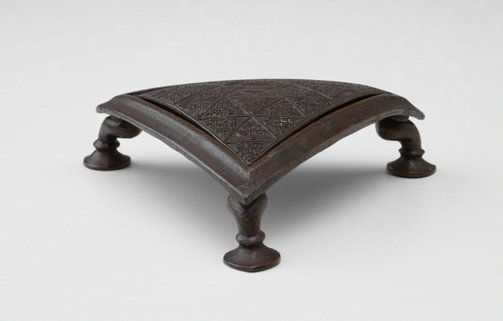 The 'yantra' sculptures present with seemingly extraordinary simplicity profound spiritual ideologies. Indian religious thought is built around the fundamental principle that all existence emerges from a single point of origin and it is to this point that everything ultimately returns. The central quest of Indian spirituality is to understand the relationship between the individual and universal and to achieve experiential realisation of the One. Sacred diagrams ('yantras') illustrate this fundamental notion in abstract form and, indeed, map out an individual's spiritual journey.

Although 'yantras' make charming display objects they are in fact ritual tools and belong to the Tantric religious tradition of India. By definition, 'yantras' are sacred dwellings or receptacles that contain the essence of a divine being. During a ritual, a practitioner will make special offerings to the deity housed within the 'yantra' and use the diagram as a meditative support to stimulate latent psychosomatic energies.

This 'yantra' consists of two parts: a flat triangular plate and a tripod frame. According to Indian religious thought, the triangle is a symbol of the female principle and denotes primal cosmic energy ('shakti'). The surface of the triangular plate contains a series of inscriptions that may be mantras (sound syllables) that manifest the energy of the deity embodied by the 'yantra'. In Tantric practice, the adherent will meditate on the 'yantra', make ritual offerings to the tripod, and utter the inscribed sonic syllables to evoke the deity, arouse psychic energies, and attain higher spiritual understanding.

The Mangala Yantra is worshipped for good fortune and success (‘mangala’). The energy of the ‘yantra’ is expressed in the inscribed mantras (Khanna 2003: 18). When the mantras are correctly recited, the ‘yantra’ becomes imbued with deity power.

Triangular Mangala Yantra on a stand