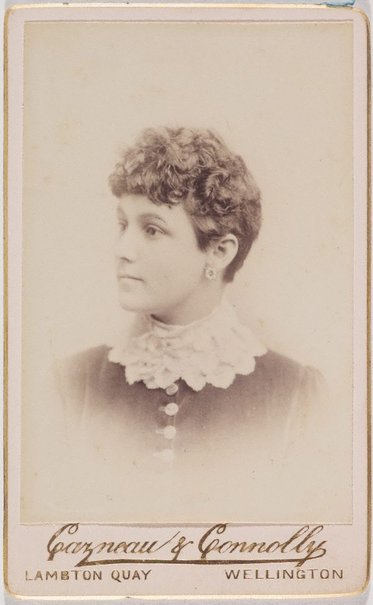 This portrait of an unidentified woman, taken in Wellington, New Zealand is a fine example of a carte-de-visite. Popular in the mid- to late-nineteenth century, cartes-de-visite literally functioned as a formal ‘visiting card’. The significance and ubiquity of cartes-de-visite as a form of cultural exchange during this period cannot be underestimated. Although in the latter part of the nineteenth century they were increasingly replaced in esteem by the cabinet card, during their time cartes-de-visite had enormous popularity and were produced by the millions world-wide. They were mostly albumen prints, though this example from the studio of Cazneau & Connolly, from 1883-85, is a platinum print. This suggests a more advanced and expensive printing process and possibly points to the social status of the woman photographed.

Cartes-de-visite like this one were usually collected and put into home albums, so one could in some way ‘revisit’ the memory of the guest or friend in question, or display one’s social standing through the expansive collection of ‘visitors’, namely via their fixed image. The present example shows remnants of a tape on the back which probably was used to affix it in an album.

The photographed woman is young and wears a high collar, detailed with a white pattern. We see one of her flower-shaped earrings as she looks over her right shoulder, in full profile. The photographers have employed a ‘fade-out’ technique around the edges of the portrait, perhaps designed to generate a sense of softness or affection in the beholder toward the visiting lady.