Peter Powditch’s flat reductive canvasses, lithographs, sculptures and reliefs take their subjects – including landscape and the figure – from everyday life. One of his key themes in the 1960s and 70s was the female nude. Depicted partially concealed by a garment or towel, and often without a head or legs, Powditch’s nudes emphasised the anonymity and fleshy sexuality of their central figure. None are identifiable individuals but rather, represent types – the bikini-clad sun worshipper or towel-wrapped bather – that speak to a 1960s Australian conception of sexuality embodied in the nubile female form. Objects for the heterosexual male gaze, Powditch’s nudes reflected the permissive moral attitudes and youth cultures of their day.

Powditch’s nudes were based on a strong foundation of life drawing, which the artist has practised in a methodical manner for decades. These drawings were made in the mid-1970s and remained in the artist’s studio until acquired by the Gallery. Rapidly executed from life, they reveal his skilful rendering of human mass and form and understanding of bodily movement. Less anonymous than the iconic nudes of his paintings and prints, they retain a sense of the model’s flesh and blood.

Browse other works by Peter Powditch 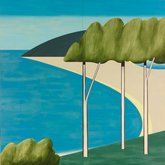