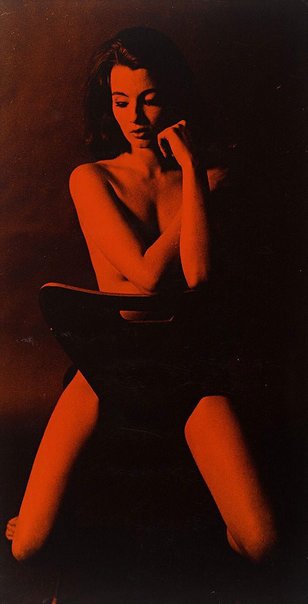 But for this iconic photograph by Lewis Morley, Christine Keeler’s notoriety might have been short-lived. In many ways, the photograph even manufactured her fame, capitalising on the reluctant celebrity of the call-girl who brought down a British Government. Keeler’s affairs with the British Secretary of State for war, John Profumo, and the Soviet military attaché Yevgeny Ivanov in 1962 created a scandal that led to the downfall of the Macmillan Government. Pictured naked and straddling a fake Arne Jacobsen chair in a pose that is both modest and provocative, the image is a simultaneous study of the nude and of celebrity. This version, stained with aniline dyes, is an unusual variation on the most reproduced image of Keeler.

Morley, an anti-establishment celebrity photographer, was a likely choice to make such an image. An outsider who was born in Hong Kong and repatriated to England after the war, Morley was the publicity photographer for the satirical revues ‘Beyond the fringe’ and ‘That was the week that was’. He also contributed work to ‘Private Eye’, a magazine which lampooned the British establishment. Morley worked throughout the 1960s as a theatre, portrait and reportage photographer and, like David Bailey and Anthony Armstrong-Jones, produced the defining images of Swinging London. He documented the advent of the mini-skirt in 1963 and discovered Twiggy, the model who would become the face of the 1960s, on one of his impromptu photographic outings for ‘London Life’. Morley emigrated to Australia in 1971, where he worked for ‘Belle’ and ‘Pol’ until 1987, when he sold his studio. 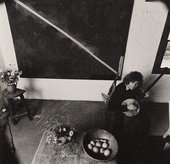