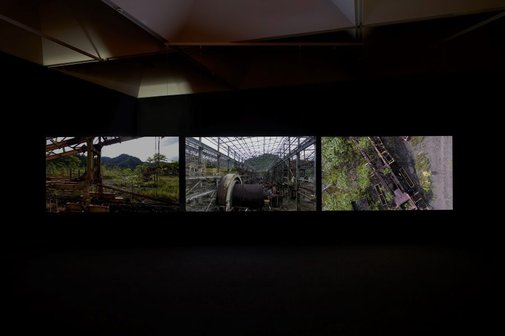 Taloi Havini's work engages the socio-political history of Bougainville and the contemporary experience of its Indigenous communities. 'Habitat' revolves around the Panguna copper mine, which triggered the Bougainville Civil War and continues to impact the land and people today.

Operations at Panguna began in 1972 under Bougainville Copper Limited, a subsidiary of the Australian company Conzinc Rio Tinto. Local landowners received a miniscule slice of the profits but bore the brunt of the mine's costs on many fronts. Mining ceased in 1989 when they revolted against the Papua New Guinean Government, which was reliant on royalties.

'Habitat' traverses the extensive middle and lower tailings areas of the mine site. Aerial footage surveys seemingly lush wetlands, abandoned infrastructure and the barren tributaries of a water system crippled by residual toxins. On the ground, the camera lingers on locals as they prepare food and prospect for gold within this devastated ecosystem. These vastly different perspectives - one dispassionate, the other embedded - offer a metaphor for the divergent agendas that have shaped the landscape. They also foreground the current challenges for people whose survival depends upon it.