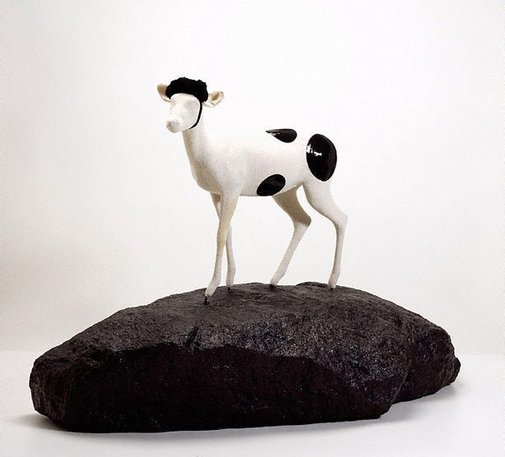 Louise Weaver concentrates on ideas about metamorphosis, evolution and representation. As she transforms animal and plant forms through ‘fantastic, decadent reinvention’,1 she animates her work with a sense of wonder and whimsy. Among the modelmakers who have dominated the younger generation of sculptors in Australia over the past decade (Callum Morton, James Angus and Ricky Swallow, for example), Weaver has brought a distinctive feminine voice to this important strand of contemporary art. The creatures and environments she creates are obsessively covered in crocheted, stitched, woven and sewn coverings. Apart from enhancing the original form, these epidermises suggest processes of self-transformation, fashionable personal display and a nature subject to the same glossy media fantasies that we are.

Weaver’s work can be situated within Melbourne post-pop art, an important trajectory in Australia since the early 1980s. Her animals relate to the humour and satire of artists such as Vivienne Shark LeWitt, Jenny Watson and Linda Marrinon. Her synthetic interpretation of the physical environment, as evident in her room installations, could even be connected to the high-coloured fantasy that is evident in many of Howard Arkley’s depictions of suburban houses and interiors. Her use of fabric and emphasis on surface also connects with artists such as Mikala Dwyer and Kathy Temin.

‘Tipsy Bolero’, part of a room-sized installation entitled ‘Moonlight becomes you’ which was subsequently sold in separate components, aptly sums up the concerns of Weaver’s art. The realism of the cast model is at odds with its extravagant epidermis. Appearance seems to be everything in Weaver’s haute couture kingdom and an unnatural selection has resulted in this very dapper antelope, perhaps we could even call him a dandylope. Weaver chooses her animals for characteristics which she perceives they possess and with which she empathises. It is a self-conscious anthropomorphism, realised in the coverings she individually tailors for each creature, designed to convey these attributes and to transform the animal into a further stage of evolutionary development.

Beauty requires discipline and these beasts are seductively beautiful in the true sense of the word ‘seduce’: they lead us to abandon our principles, in this case, discomfort with anthropomorphism and with ornamentation in art. They also function as fetish objects in a number of ways: in the elaborate handsewn attention paid to their coverings, in the attribution of personalities and qualities to inanimate objects, in the pleasure derived from looking at their sleek surfaces and luscious tails, and in the attention they demand as artworks. They are not cuddly toys to be played with, but are for display purposes only and yet it is no coincidence that soft toys frequently are of animals. Toys and animals carry the weight of being attributed human values and desires: an unthreatening nature, unconditional love, non-judgmental understanding. Animals and their representations are therapeutic companions, a stand-in for the relationships or personas we would all like to have. Stuffed and mounted, they give the impression that we have control over our environment and how we live in it.

Browse other works by Louise Weaver