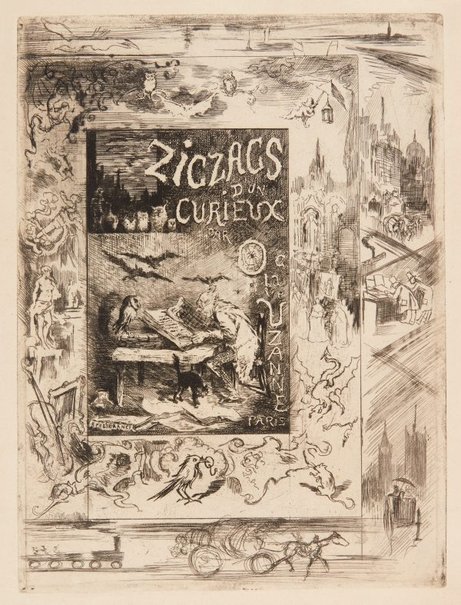 The art critic Philippe Burty and the writer Octave Uzanne counted amongst the devoted admirers of Buhot and were avid collectors of his prints. On the occasion of his first retrospective exhibition in 1888 arranged by the New York dealer Frederick Keppel, Uzanne published a major article on Buhot for 'Le Livre'. The same year, Buhot contributed a fanciful and uncommon frontispiece to Uzanne’s publication 'Les Zigzags d’un curieux'. The central subject which is surrounded (on all sides) by pictorial margins which are in turn partially enclosed (top, right and bottom) by another set of pictorial margins. In his article, Uzanne’s admiration for the artist went beyond critical concerns into a celebration of his romanticism. Perhaps influenced by his frontispiece, Uzanne wrote:
Buhot is, above all, a visionary, obsessed by the pictorial qualities of modern life. Nervous to an excess, tortured by the flame of fleeting impressions and Baroque ideas, he suffers from the cruel impotence of his inability to translate, as he would like to, his eye’s clear and positive vision in the course of his Parisian and rural strolls, and also the funeral images of his black-and-white imagination. There is in him a formidable pent-up fantasy… No matter what he does he reveals this demonic and sickly personality in his inventive compositions… In his etched observations, he will make grimacing faces, sceptical and sardonic devils, while the melancholic owl swoops about everywhere in his work, the symbol of his chronic hallucinations. (Octave Uzanne, ‘Un illustrateur aquafortiste’, Le Livre, March 1888, pp 75–76)
The owl, Buhot’s avian alter ego and the subject of his signature stamp, makes appearances throughout Buhot’s graphic work, often tucked away in a marginal sketch or here in the central image and the margins.

Annandale Galleries, 1989, Sydney/New South Wales/Australia, Anne Gregory bought the print in auction, Drouot Paris in Sept-Nov 1989 and sold it to the present owner soon after.

Browse other works by Félix Buhot