A by-way to Pitt street 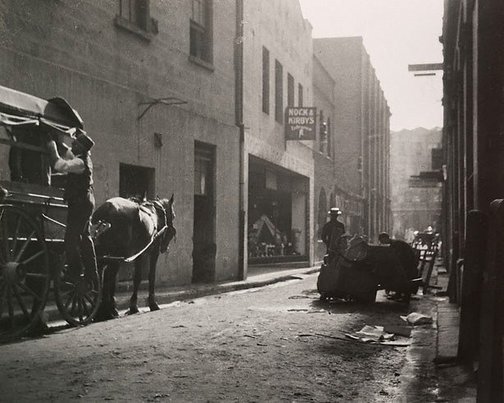 Harold Cazneaux was born in Wellington, New Zealand, 1878 and died in Sydney, 1953. Both his parents, Pierce Mott Cazneau and Emma Florence (née Bentley), operated a photographic studio in Wellington during the 1870s and 1880s. The family returned to Australia around 1887 where his father managed Townsend Duryea's studio.

Cazneaux was employed at Hammer & Co photography studio in Adelaide as a colourist and retoucher in 1896, during this time he attended evening classes at the Adelaide School of Design. His artistic interest in the art of photography was sparked by a visit in 1898 to the first Australian exhibition of 'Pictorial Photography', organised by the South Australian Photographic Society.

In 1916, with Cecil Bostock and a group of like-minded pictorialist photographers, Cazneaux established the Sydney Camera Circle. They met once a month for discussion, assessment of each other's work and the exchange of ideas. Cazneaux developed the idea of a uniquely Australian form of pictorialism which took account of the bright antipodean light.

After leaving Freeman's he opened his own studio in 1917 which was originally located in Denman Chambers, Phillip Street, in the city with fellow photographer Cecil Bostock. In 1920 he moved his studio to the family home in Roseville where his daughters assisted him in the business.

In 1920 Cazneaux became the official magazine photographer for 'The Home', a periodical that ran from 1920-1942 under the patronage of Sydney Ure Smith. It contained a mix of fashion illustration, architectural and garden studies, decorative arts, and society portraits. Cazneaux had previously concentrated on documenting views of old Sydney and picturesque landscapes. Other magazines and publications he worked for included 'Art in Australia', 'Sydney Surfing' and 'The Sydney Bridge Book'.

Cazneaux was an active speaker, writer, teacher and judge who contributed to the 'Australasian Photo Review' and wrote an annual review from Australia for the English publication 'Photograms' of the year from 1919-1952.

In 1938 Cazneaux was made an Honorary Fellow of the Royal Photographic Society of Great Britain. The Sydney Camera Circle organised a tribute evening to him in 1952.

This Gallery has one of the best collections of Cazneaux's work and held the first major museum exhibition on Cazneaux, as is fitting for such an important photographer of Sydney.