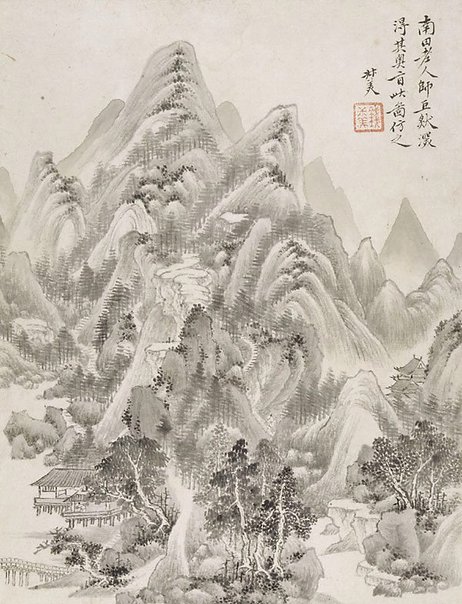 Qian Du, alias Shumei, was a native of Qiantang in Zhejiang province (now Hangzhou). He was the most accomplished member of a family of painters and was recognised to be skilled in painting a number of different subjects: landscape, figures, ladies, and flowers.
Judging by its subject, this leaf was originally part of a larger set of copies of ancient masterworks. Juran, the artist mentioned by Qian Du in his inscription was a great landscape painter of the tenth century. Along with his teacher Dong Yuan they created a new style of monochromatic ink landscape painting that inspired a large following. The most noticeable characteristics of Juran’s style were copied in this painting. For instance, a type of ‘long hemp-fibre’ stroke which has been employed for both the contour and the texture of the mountain and the wet and heavy brush dots (taidian or moss dots) were applied to accent the hills. In addition, the illusion of recession into space that was developed by Dong Yuan and Juran has been used to structure the composition.
In ancient China it was a common practice for an artist to learn painting by copying ancient masterworks. The Chinese believe that studying the ancients and copying their works provided the insights and techniques essential for personal expression. Chinese artists embrace the idea that the past can fertilise the present. A number of Qian Du’s paintings attest to his interest in an archaic style, although many of his late works suggest that he was able to develop a personal style by blending elements from the old masters with individual qualities all his own.