The vortex, from the suite Caloola 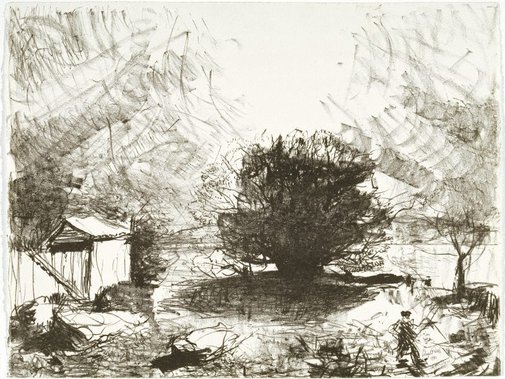 Rees experimented with etching as a young man, but did not turn seriously to printmaking until much later in his life. 'The Caloola Suite' was his first series of lithographs, the final published group of six selected from seventeen made at the time. The subjects were inspired by landscapes of special personal significance, including those around his holiday home 'Caloola' at Werri Beach on the south coast of New South Wales and in Hobart, from the top of Mount Wellington and looking towards the River Derwent from his son's house at Sandy Bay.

For Rees, prints were an extension of drawing. 'The Caloola Suite' underscores the energy and monumental scale of his later works, paintings as well as drawings. Although reluctant to make lithographs at first, he was astonished at how well they turned out:

"... it's a funny thing with human nature. If I had been agreeable to do them in the first case, you know - responded, I think that they might have been less interesting. The fact that I was in a state of rebellion had something to do with it ... I remember I was a bit resistant sitting back with a big board and saying 'Well, what is it' ... and without any inhibitions I went at it, you see ... I thought they'd be no good. They were simply grey impressions [on the aluminium plates] ... when we made the lithographs with Fred Genis, he came in and put them out on the floor; I was staggered."
- Lloyd Rees 1983