Illawarra landscape, from the suite Caloola 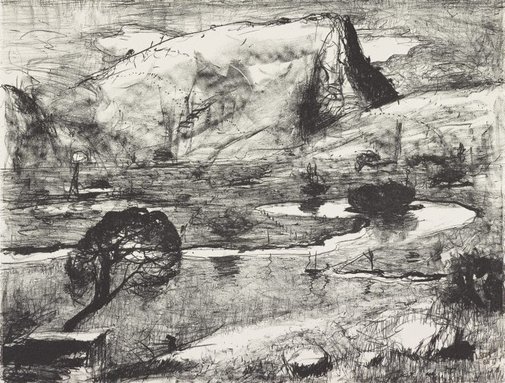 Rees experimented with etching as a young man, but did not turn seriously to printmaking until much later in his life. 'The Caloola Suite' was his first series of lithographs, the final published group of six selected from seventeen made at the time. The subjects were inspired by landscapes of special personal significance, including those around his holiday home 'Caloola' at Werri Beach on the south coast of New South Wales and in Hobart, from the top of Mount Wellington and looking towards the River Derwent from his son's house at Sandy Bay.

For Rees, prints were an extension of drawing. 'The Caloola Suite' underscores the energy and monumental scale of his later works, paintings as well as drawings. Although reluctant to make lithographs at first, he was astonished at how well they turned out:

"... it's a funny thing with human nature. If I had been agreeable to do them in the first case, you know - responded, I think that they might have been less interesting. The fact that I was in a state of rebellion had something to do with it ... I remember I was a bit resistant sitting back with a big board and saying 'Well, what is it' ... and without any inhibitions I went at it, you see ... I thought they'd be no good. They were simply grey impressions [on the aluminium plates] ... when we made the lithographs with Fred Genis, he came in and put them out on the floor; I was staggered."
- Lloyd Rees 1983

Lloyd Rees is one of the most admired and important Australian twentieth century landscape painters and draughtsmen. Born in Brisbane, he spent much of his life in Sydney. Retrospectives of his work were held at the AGNSW in 1942 and 1969, at the University of Melbourne in 1981, a comprehensive survey of his prints by TMAG in 1986 and a retrospective of drawings at the AGNSW in 1995. He remained active until his death in Hobart in 1988.

Lloyd Rees experimented with etching in Brisbane while he was a young man and when he was a junior artist with the Government Printing Office in Brisbane he made a lithograph to commemorate the introduction of the first lithographic rotary printing machines in Australia.

He made an etching in Sydney of the city from Waverton in 1919 (printed in an edition posthumously in 1995) and two in 1922 with the help of Percy Leason, but they were not printed until 1965, nor editions until 1975. It was not until he was eighty years of age in 1975 that Rees began making prints consistently when David Rankin and Max Miller of the Port Jackson Press approached Rees, and encouraged him to make a small number of soft-ground etchings. He then began to make lithographs, at first reluctantly, with the 'Caloola Suite'.

The 'Caloola Suite' consists of six lithographs, which were selected from seventeen made by Rees on the subject. The subjects were inspired by the landscape around his holiday home 'Caloola' at Werri Beach on the South Coast of NSW, and Hobart in Tasmania from the top of Mount Wellington and looking towards the River Derwent from his son's house at Sandy Bay. The Gallery has the complete suite and all the associated prints, including several rare first states, some hand-coloured by Rees. The subject of 'Illawarra landscape' looking from 'Caloola' across the waters of Werri Creek towards mount Saddleback, is closely related to a drawing 'The South Coast' 1980 (see Hendrik Kolenberg 'Lloyd Rees drawings, centenary retrospective' AGNSW, 1995, no. 117) and a soft-ground etching 'Illawarra landscape' 1977 (Kolenberg 'Lloyd Rees etchings', no. 19'.