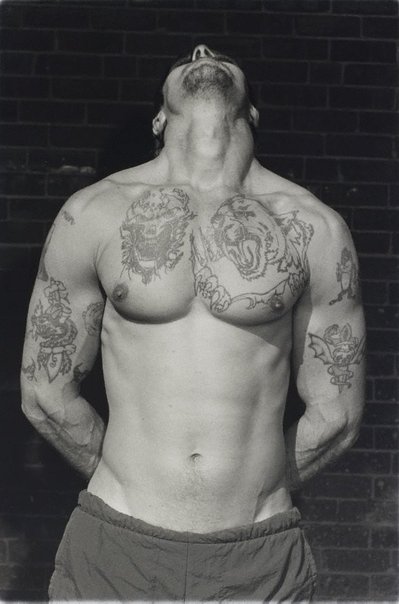 Sue Paull is known today for her long-standing and important work as an educator. In 1986 she was invited to teach at the Long Bay Correctional Complex in Sydney where she worked with inmates from the maximum security section and subsequently developed the ‘Boomgate’ gallery, exhibiting art made in the prison.

Paull trained as a photographer at Newcastle College of Advanced Education at the end of the 1970s and was engaged with conceptual and socially committed forms of photography early on. Throughout the past two decades, much of her photographic work has been concerned with documenting the environment of Australian prisons and the lives of the inmates.

‘I like to photograph little details, the quirky things, the way human beings personalise their living spaces, even if they are prison cells’1 Paull said of her approach to the subject. This is also evident in her portraits of inmates, such as ‘Wayne Brown’ 1997. Photographed in direct natural light and in a starkly documentary manner, Paull’s image emphasises the highly detailed tattoos on the man’s body. With his head bent backwards and the face rendered invisible, the intricate markings become the focus. The photographer aims to see beyond appearances and stereotypes by highlighting the complexities she finds here. Brown’s powerful physique and many of the tattoos connote force and aggression. Yet the beauty and sensuality of the designs and a single word etched on his right arm – ‘Mum’ – also speak of sensitivity and vulnerability. As photographer and critic Robert McFarlane has noted, ‘trust between subject and photographer is the most common element in Paull’s pictures.’2 It is this aspect that gives her portraits their critical yet highly emotional resonance.