The inland sea (new moon to the warren) 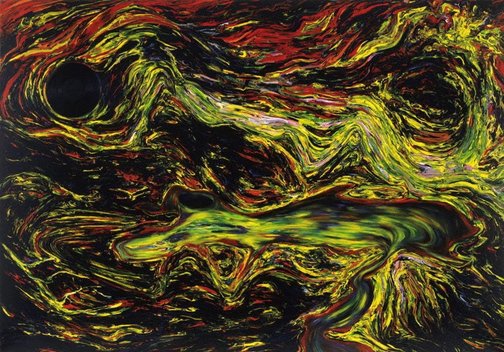 Dale Frank is a prolific painter, first exhibiting in the mid 1970s at a time when he was also experiment-ing with performance art. Shifting between Australia and Europe during the height of the Transavant-garde movement, Frank enjoyed both Australian and international acclaim and exhibited alongside Anselm Kiefer and Thomas Lawson in Helena Kontova’s exhibition ‘Panorama della post-critica: critica ed arte’ and in the ‘Aperto’ section of the Venice Biennale in 1984.

The titles of Frank’s paintings are often long, and at times poetic or ironic, implying content yet eschewing interpretation while embodying his idea of the painting as a living entity, constantly changing and transgressing its form and meaning. ‘The inland sea (new moon to the warren)’ is redolent of the internal psychological ebb and flow of nature and the human mind, drawing the viewer into its swirling cosmic oceans of colour and texture that emote a sense of flow and change evident in many of Frank’s images. Through the material qualities of the paint, Frank mediates a metamorphosis between ocean, landscape and cosmic space, continuing his exploration into varying states of physical and psychological intensity apparent in his earlier performance-based art. Heavily applied, the viscosity of the paint brings a three-dimensional quality to the work into which the viewer can visually, metaphysically or spiritually dive. The LP record in the upper left corner provides a portal, or black hole, drawing the paint, colour and world of the inland sea into its dark and empty innerness. The void could also be a birthing darkness, spewing the oceanic colour into our space. The application of paint in a thick, swirling, multi-coloured, multi-figured drag and pull, conjures up the angry night skies of van Gogh, the eerie ghost-ish spirituality of Munch, or the fiery, dark early landscapes of Mondrian.

The visceral oily surfaces of Frank’s paintings seem to be relentlessly under the effect of gravity; particularly his later works that tend to creep across the canvas and bleed over the edge, spilling into the viewer’s space. Continuing the theme of cosmic portals and black holes, ‘Stephen Hawking’ 2001 and ‘Stephen Hawking and the illusion of size’ 2001 (both AGNSW collection) reflect his ongoing interest in the material qualities of paint and surface. The starry resin nodules remain as an active element, continuing to run and change as they slowly solidify. The physicality of Frank’s paintings and the bodily response of the viewer meet somewhere between the void and depth of the work and the sometimes surprising, spatial splurging of the paint.

Dale Frank
The inland sea (new moon to the warren)