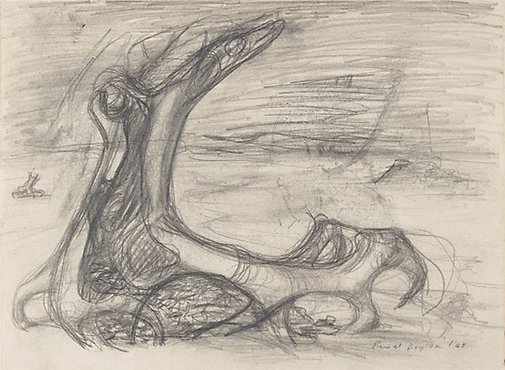 This drawing is related to Drysdale's major painting 'Walls of China', also in the Art Gallery of New South Wales collection. It arose out of Drysdale's journey in 1944 through the drought-stricken inland of western New South Wales. A series of dry seasons had culminated in a year of severe drought, the worst on record. Towards the end of the year 'The Sydney Morning Herald' commissioned him to accompany reporter Keith Newman and a photographer to cover the story. Drysdale's illustrations for three newspaper reports led to recognition of his great skill as a draughtsman; while his experience inspired a remarkable series of paintings including 'Walls of China'.

While Drysdale's newspaper illustrations of the drought were mostly based upon memory or thumbnail sketches that he had made on the spot; this drawing was made in the studio following his return to Sydney. As part of his working process, Drysdale created a small pen and ink drawing 'Study for 'Walls of China' '(also in the AGNSW collection. The latter summarises his planned composition for the painting, revealing a stage when he had selected the wind-eroded form of a dead tree to comprise the central motif, symbolising the devastation he had witnessed. This larger pencil drawing 'Study for 'Drought' series' reveals a development from this in which Drysdale invested the basal root of the tree with a claw-like talon, to heighten the surreal atmosphere of his experience.