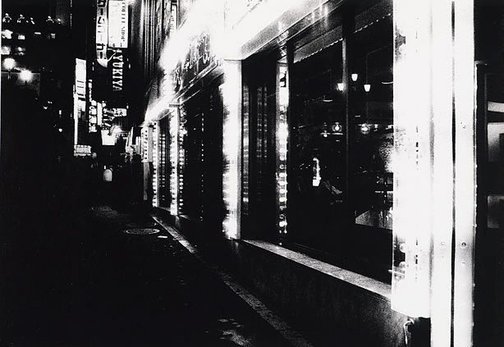 Daido Moriyama began his working life at the age of 20 as a graphic designer in Osaka. However the following year he embarked on the study of photography under Takeji Iwamiya and around this time he discovered the work of William Klein and Shomei Tomatsu. In 1961, Moriyama moved to Tokyo and became Eikoh Hosoe's assistant for 3 years, working on Hosoe's series with novelist Yukio Mishima, 'Ordeal by roses'. He was deeply influenced, however, by his regular contact with Tomatsu. By the mid 1960s Moriyama was publishing his photographs regularly and his dark, grainy, snapshot signature style was beginning to mature. In 1968 Moriyama's first major series 'Japan: a photo theatre' with text by theatre radical Shuji Terayama was published.

By the early 1970s Moriyama had become a media star in Japan and in 1971 he travelled to New York for the first time with artist Tadanori Yokoo and there he encountered the work of Weegee. In 1974 Moriyama was included in the ground breaking 'New Japanese photography' at the Museum of Modern Art, New York. Subsequently, he published his work extensively in monographs (eg. 'Daido hysteric') and major Japanese photography journals. In more recent years his work has been the subject of monographic exhibitions such as 'Stray dog', San Francisco Museum of Modern Art and international tour 1999-2001, and 'Daido Moriyama', Fondation Cartier, Paris 2003

Moriyama's work is best described by Sandra Philips who curated Moriyama's major exhibition at SFMOMA: 'Moriyama is an expressionist: he possesses a dark, intense eroticism and an appreciation for the tragic. He understands the conflicts in Japanese society - between acceptance of western culture and the quest for a separate Japanese identity, between acceptance of modernity and admiration for traditional ritual and custom. … It was Moriyama's gift to infuse the commonplace, populist appreciation of what he found on the street with a foreboding energy, to fuse… conventional society and the powerful undercurrent of the forbidden - and do it in the language of the everyday.'

Browse other works by Moriyama Daido