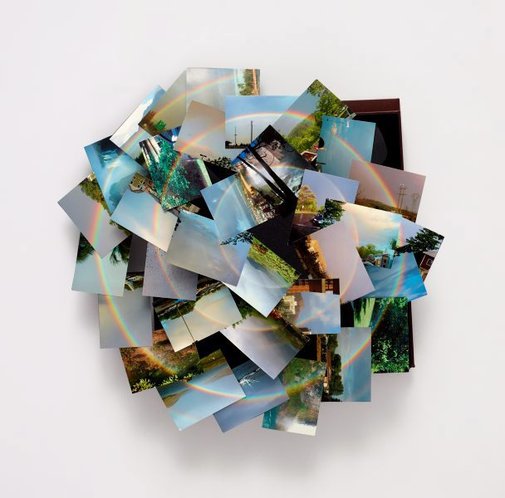 Peter Coffin graduated from University of California, Davis, in 1995 then obtained an MFA from Carnegie Mellon University in 2000. In his sculptures, installations, photographs and videos, Coffin examines our knowledge and interpretation of the world with curiosity and wit, borrowing from numerous disciplines, such as art history, science and New Age beliefs to test his ideas about the way things work and exist. Solo exhibitions include Smithsonian Hirshhorn Museum and Sculpture Garden, Washington D.C., The Aspen Art Museum, Colorado, The Barbican and South London Gallery, London, MoMA, New York, CCA Wattis, San Francisco, Palais de Tokyo, Paris.
The work comprises an album of photographs of rainbows which unfurl in a three-dimensional spiral. The concept was derived from an earlier wall hung work ‘Untitled (rainbow spiral)’ 2005. Peter Eleey wrote in 2007:
‘For ‘Untitled (Rainbow’(2005)[Coffin] created a spiral of 30 postcard images of rainbows, as if they were all one continuous stream of light emanating from a single source. The spiral happens to be the oldest symbol used to depict the sun and, of course, also a prominent feature in the work of Robert Smithson and Mario Merz. But beware. Sometimes the artist’s mash-ups are red herrings … in which he intends no greater meaning than whatever drew him to the pictures in the first place.’ [‘Frieze’ Issue 106, April 2007]