Children dancing by the lake 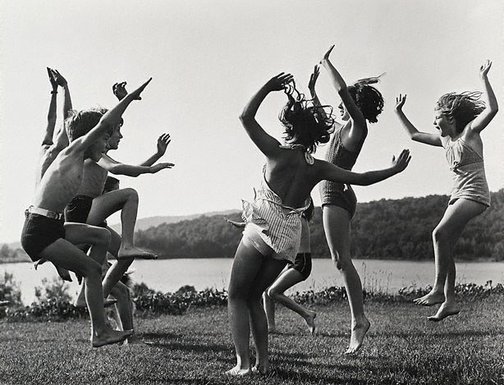 Barbara Morgan was a dynamic and innovative interpreter of 20th-century American dance who remains the chief influence on contemporary photographers such as Lois Greenfield. She was born in Kansas but grew up in California, where she trained as a painter. From the outset her subject matter tended toward an exploration of rhythmic motion. She met Edward Weston later in the 1920s before moving to New York. It was not until 1935 that she turned completely to photography, the same year that she met Martha Graham with whom Morgan shared a lifelong friendship and working relationship. Over the following decade she photographed dancers such as Graham, Merce Cunningham and many others, which resulted in the portfolio ‘American modern dance’ 1935–45. Her published work includes a major monograph on Graham from 1941 and ‘Summer's children: a photographic cycle of experience with children's camp life’ 1951. Morgan's interests were broad and crossed into many disciplines including archaeology, anthropology and literature. She counted among her close friends Berenice Abbott, Wynn Bullock and Minor White, and she was a founding member of ‘Aperture’ magazine which dedicated a special issue to her work in 1964.

‘Children dancing by the lake’ is an example of Morgan's outdoor work and exhibits her hallmark vibrant interpretation of movement and form. The leaping children, their long shadows set against a pale sky and limpid water, are full of life and expression. As Morgan herself noted: ‘I'm not just a “Photographer” or a “Painter” but a visually aware human being searching out ways to communicate the intensities of life.’1