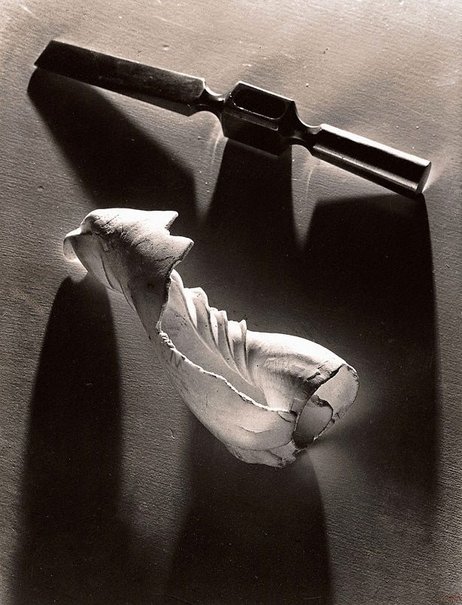 This photograph relates conceptually to Dupain’s experiments with photographs of nudes. According to the vitalist philosophies of the time, the spiralling rounded shell being shaped by nature is feminine, while the hard metallic tool is man-made and represents the masculine principle. Photographed on a plain surface and lit with raking light, the sense of space is ambiguous. Dupain retained an interest in still-lifes throughout his career, returning to them particularly towards the end of his life. In the 1930s his most well-known still-life was ‘Shattered intimacy’ 1936 (AGNSW collection) where an image of broken glass and a broken classical statue has been solarised, producing a powerful narrative. ‘Two forms’ is a more contemplative image as the shell and the head of a hammer lie side by side and are of similar scale. Interestingly, the two forms are distant from each other, rather than close together, and their scale gives them equality. It is not known whether Dupain necessarily subscribed to the contemporaneous anxiety about the ‘new woman’, but certainly one can read this image as an examination of difference.

Ursula Prunster, Seeing is believing: the art in photography, Sydney, 1985. catalogue no: 15