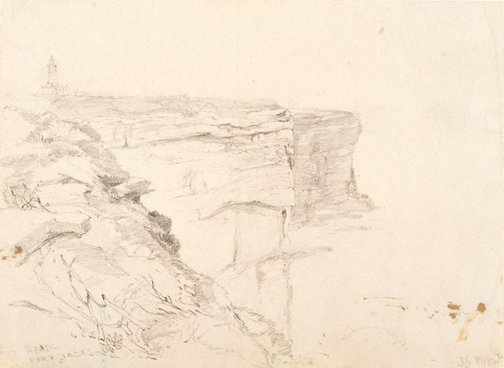 This is one of two drawings by Skinner Prout of Sydney Heads from William Robertson's collection. It includes the historic Macquarie Lighthouse, Australia's first, and was made as a study for the lithograph in Part III of his series 'Sydney illustrated' 1843, about which John Rae wrote:

"The present view, which is taken from the cliffs, a little to the South of the Light House, give a faithful and characteristic representation of the scenery around the Heads... Macquarie Tower and Light House (containing a revolving light), is situated on the highest part of the outer South Head of Port Jackson Harbour... To the North of the Light House, on the dark cliff in the centre of the picture, stand the Signal Station, Signal-post, and Telegraph, which communicate to the Station on Fort Phillip all information about vessels entering or leaving the harbour".