Tracing of study of dead lion for 'David's first victory' 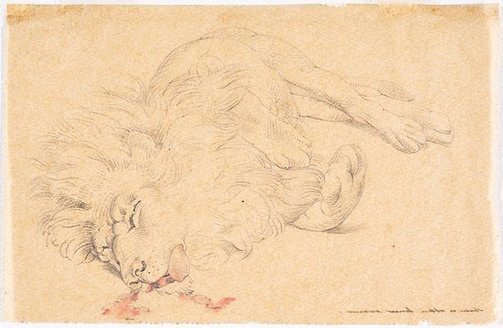 This is a preparatory study for the painting 'David's first victory' 1868, in the Gallery's collection. Its subject is from 1 Samuel 17 in the Bible:

'And David said unto Saul, thy servant kept his father's sheep, and there came a lion, and a bear, and took a lamb out of the flock: And I went out after him, and smote him, and delivered it out of his mouth; and when he arose against me, I caught him by his beard, and smote him, and slew him. Thy servant slew both the lion and the bear; and this uncircumcised Philistine shall be as one of them, seeing he hath defied the armies of the living God'.

This tracing was made so that the drawing of the lion could be considered in reverse, which is how the animal appears in the painting.