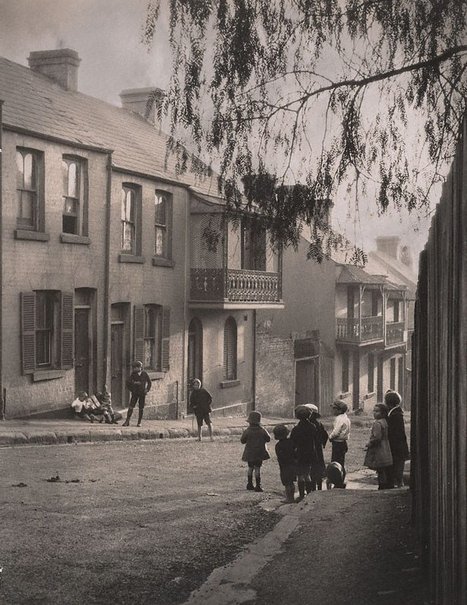 A Surry Hills alleyway is a photograph of children loitering in an inner city, residential street. Surry Hills was a poor neighbourhood in the early twentieth century. In 1900, like The Rocks, it was infested with bubonic plague that was carried on vermin. As a result, the suburb underwent a drastic cleansing and disinfecting process. In 1902 the Sydney Municipal Council extended state intervention into Surry Hills dismantling slum dwellings and assessing the quality of the existing terraces, many of which had been illegally extended rendering them structurally unsound 1. Cazneaux’s photograph alludes to the poverty characteristic of the suburb during this period. The young boy in the centre of the frame appears without shoes or a cap. Yet, as Steven Miller argues, Cazneaux’s photography was rarely documentary or topographical, and more frequently concerned with light and form 2. A Surry Hills alleyway is an idyllic representation of children’s play. The low-lying sunlight filters up the street, silhouetting the tree branch that arches through the right side of the frame. The sunlight casts long shadows from the figures of the children in the foreground.
Harold Cazneaux was born in Wellington, New Zealand in 1878. His parents, Pierce Mott Cazneau and Emma Florence (née Bentley) worked in commercial studios in New Zealand before returning to settle permanently in Adelaide during the early 1890s. At the age of 18 Cazneaux went to work alongside his father at Hammer & Co studio as a retoucher. He moved to Sydney in 1904 to join the larger portrait firm, Freeman’s quickly ascending to the position of ‘chief operator’ (as camera portraitists were known). Studio work was highly formulaic, with little scope for creativity. Cazneaux used his time walking to and from work to experiment with pictorialist aesthetics 3. The Photographic Society of New South Wales organised an exhibition of Cazneaux’s photographs in 1909, the first such solo exhibition of its kind in Australia. In 1916 he and fellow pictorialist photographer, Cecil Bostock founded the Sydney Camera Circle. The group was particularly interested in the how pictorialism could be adapted to and extended within an Australian context. The mechanised, standardised and frenetic pace of Freeman’s increasingly took its toll on Cazneaux’s creativity and health, and he resigned in 1917. He moved with his wife and daughters to the Sydney suburb of Roseville, and in 1920 he was employed as the official photographer for The Home magazine. This new position let him work in a varied indoor and outdoor environments. In 1938 Cazneaux was awarded an Honorary Fellow of the Royal Photographic Society of London. He continued to work until his death in 1953.
1. Keating C 1991, ‘Surry Hills: the city’s backyard’, Hale & Iremonger, Sydney p 68-9
2. Miller S 2007, ‘Chapter 4: Australian Pictorialism’ in, ‘Photography: Art Gallery of New South Wales Collection Handbook’, Art Gallery of New South Wales, Sydney p 82
3. Newton G 1988, ‘Shades of Light: Photography and Australia 1839-1988’, Australian National Gallery, Canberra p 85