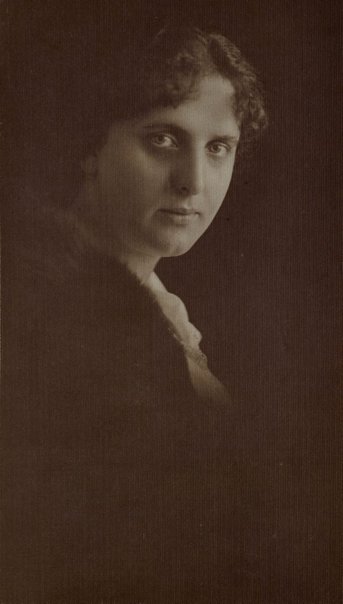 May Moore was born in New Zealand and studied painting at the Elam School of Art and Design in Auckland. Although an accomplished painter, May became interested in photography and by the age of 27 had established her own photographic studio in Wellington with her younger sister Mina. In 1910 May moved to Sydney, and opened a studio next to the office of The Sydney Bulletin. Within a year, Mina had relocated to Australia to work alongside her sister in the Sydney studio, before moving to Melbourne to expand the business.

The sisters earned a reputation for their idiosyncratic portraits. Their distinctive style was characterised by dramatic lighting, close-cropped framing and rich sepia tones. Much of their work appeared in popular women’s magazines such as The Home as well as literary publications including The Triad and The Lone hand. They specialised in theatrical and social portraits and their subjects were often actors and artists including Nellie Melba, Thea Proctor and, in this photograph, Evelyn Chapman. Chapman was the first female Australian artist to depict the western front after World War I.

The photograph was taken after Chapman returned from Europe. As with earlier portraits by the Moore sisters, the contours of the face are highlighted on one side by a thin shaft of light, a technique known as Rembrandt lighting. Working in a modest studio without a glass roof or walls, the Moore sisters were limited in their access to natural light sources and were forced to light their subjects from smaller domestic-sized windows. Embracing this constraint and using low light levels as a compositional feature within their work, the sisters developed their own unique photographic style.

Browse other works by May Moore