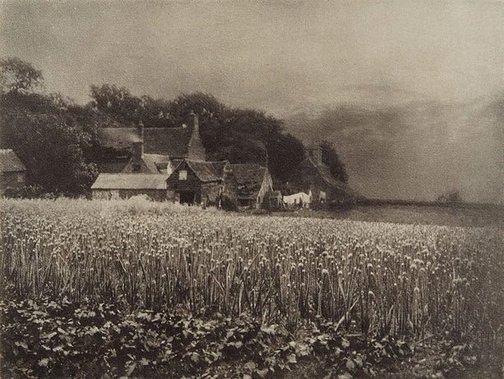 George Davison was one of the founding members of The Linked Ring Brotherhood, a group of photographers who severed their association with the Photographic Society of Great Britain to set up their own salon, feeling the concerns of the society to be too focused on technical issues rather than on matters of artistic merit.

Davison’s work was influenced by Peter Henry Emerson’s ideas of selective focus in photography which emulated the eye’s vision of nature. Davison adapted these theories to espouse an impressionist aesthetic. He believed photography to be in a unique position to evoke nature through direct experience which, when distilled by an artistic sensibility and handling of the medium, could provide an enhanced impression of nature by portraying its essence.

‘The onion field’ (originally titled ‘An old farmstead’) was the first impressionist photograph that Davison exhibited in 1890. He took the image using a pinhole camera – where a small hole on a piece of metal replaced an ordinary lens – which diffused sharp detail to provide an image of landscape through an overall soft focus, accentuated by the collective patterning of onion flowers.

While Emerson would come to resent his ventures into naturalistic photography when seeing its impressionist extremes in works such as Davison’s, it met the approval of Alfred Stieglitz, champion of a new generation of pictorial photographers, who reproduced ‘The onion field’ as a photogravure 17 years later in the pages of his illustrious journal ‘Camera Work’.