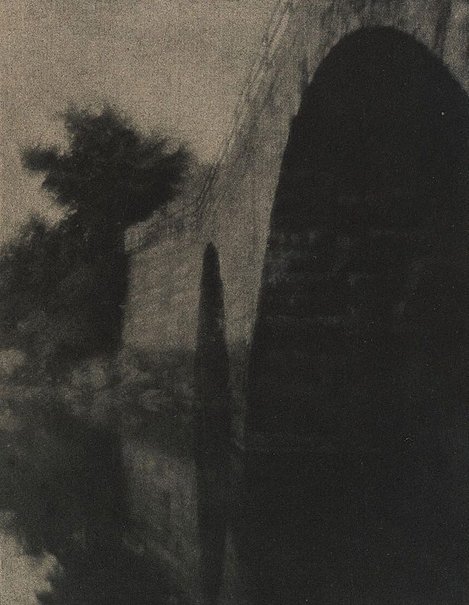 Alvin Langdon Coburn was one of a key group of photographers whose work redirected the aesthetics of 19th-century pictorialism towards the realm of 20th-century avant-garde practice. He was introduced to photography by his distant cousin, the prominent pictorialist Fred Holland Day, in 1898. Within the next five years he had become a central figure in the circles of artistic photography, and was invited to join both the Photo-Secessionists in New York and The Linked Ring Brotherhood in London – groups which included the most artistically progressive photographers of international pictorialism.

Coburn claims that it was his study of the techniques of Japanese art, under Arthur Wesley Dow during a summer school at Ipswich, Massachusetts, in 1902 and 1903, that had the most profound and enduring impact on his work. ‘The bridge, Ipswich’ may well have been taken during the latter course of this study. It reveals Coburn’s adherence to the formal principles of Japanese art by embracing the notion of ‘notan’; that is, the use of light and dark tones which suppress detail and create a composition of overlapping abstracted shapes. Coburn intensified the impact of this aesthetic through his use of a telephoto lens which, as he wrote to Alfred Stieglitz, eliminated the details of the middle ground and enhanced the effect of a Japanese-style spatial flattening.1

‘The bridge, Ipswich’ was included as a photogravure reproduction in Stieglitz’s illustrious journal ‘Camera Work’ in 1904, signalling the influence of its Japanese-inspired post-impressionist style in the emerging trends of American pictorialism.