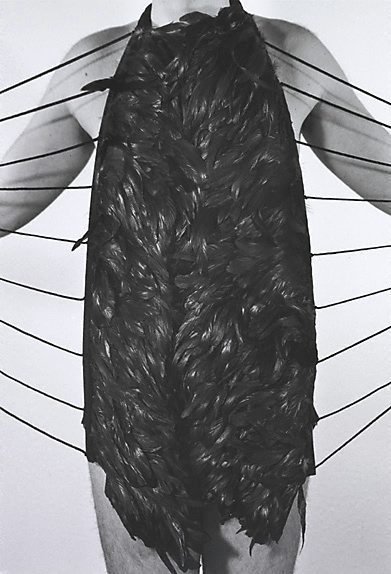 Some of Horn’s earliest performance works involved body extensions. In ‘Finger gloves’ 1972 (AGNSW collection) she created preposterously extended fingers with which she tried to pick up some objects from the floor. In another work her extended fingers scratched the walls on either side of a room; yet another included pencils attached to a face mask which she used to draw an inchoate muddle of lines on paper. All of these body extension pieces seem to somehow struggle with the impossible; the extended fingers hopelessly search out spaces and objects but fail to control the unruly world. She has also built drawing machines where long, jointed spears mechanically jerk around creating scratchy arbitrary compositions on the floor or wall. In nearly all of her works there is an exacerbated kinaesthetic sensibility. We are made acutely aware of our own space and we can easily enough slide into her dreamlike world, where our grasp on things slips away.

‘Pendulum with emu egg’ 1987-94 (AGNSW collection) consists of an emu egg that sits on a precarious, almost invisible, support near the floor. The egg is of course a very powerful symbol of femininity and procreation. Hanging above the egg is a long javelin attached to a mechanism at ceiling height. The point of the javelin at rest sits just above the egg, almost but not quite touching it. Suddenly the javelin swings back jerkily, driven by a timed mechanism aloft. It seems destined to smash the egg as it swings past but it slowly settles down into a gently declining arc till it almost seems to caress the egg with its tip. The piece is at once threatening, humorous and an intensely erotic evocation of feminine pleasure, beyond the blossoming of Duchamp’s bride stripped bare and tickled by the breeze that ruffles her lingering veils.

‘Love thermometer’ 1988 (AGNSW collection) on the other hand is an image of male pleasure. It is a functioning thermometer with a large globe filled with red-coloured alcohol. At room temperature the fluid stays in the globe but if the object is picked up and held it responds to the viewer’s body warmth and the fluid runs up the stem, visibly engorging the form of the instrument. The enormous globe and stem of the thermometer nestle in a beautifully constructed case, like that designed for a musical instrument, while the lining is padded silk, again reminding us of Duchamp’s love of the mould and its cast, positive and negative, and the inevitable sexual allusion to male and female genitalia.