Possibilities, from the suite Thinking about leaving 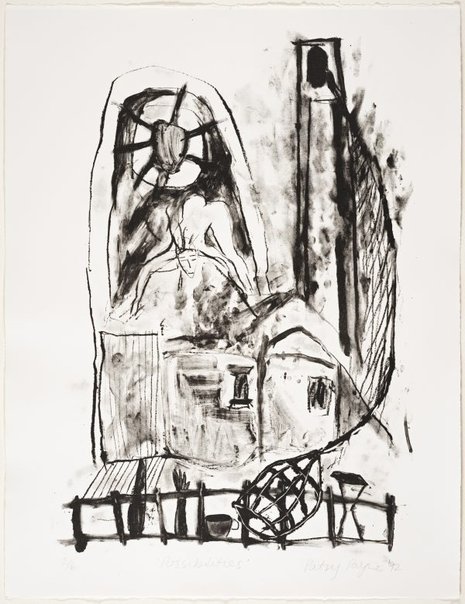 This lithograph is from a group of nine made by the artist, in collaboration with Master Printer, Fred Genis, in 1992. In her catalogue essay for their exhibition in June that year at aGOG (Australian girls own gallery) in Canberra, Mirabel Fitzgerald describes them as ' ...a figurative representation of the psyche', with the dreamlike images suggesting confinement, oppression and a desire to escape. The image contains the figure of a female, exposed and vulnerable, contained within an oppressive architecture. As a print, it is a sophisticated and refined expression of the lithographer's art.

The print was made while the artist was living in Melbourne; Fred Genis (then based at Kenthurst, New South Wales) would send her transfer paper, which Payne would draw upon in her studio, before returning it to him. She visited Genis' studio twice for proofing, after which an edition of six impressions were made of each print in the series.

Mirabel Fitzgerald., Patsy Payne: thinking about leaving, 'The architecture of confinement', 1992, [not paginated] 7.

Browse other works by Patsy Payne