The visit of the Queen of Sheba to King Solomon 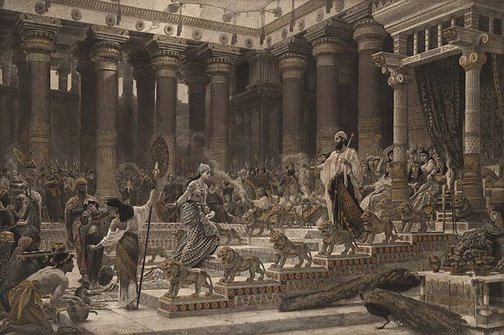 This rare print is of particular interest with respect to the early history of the AGNSW. It reproduces Poynter's most important work and one of the most loved pictures in the collection.

It was published in 1892 by Raphael Tuck and Sons in London, the very same year that the original painting was purchased by the Gallery from Thomas McLean's Gallery in Haymarket, London. McLean also owned copyright for the print, which he "respectfully dedicated to the Trustees of the National Art Gallery of New South Wales". (The dedication is obscured by the mount).

Poynter's composition was largely known to the British public through this print. Photogravure was employed from the 1880s to make high-quality, expensive, single-sheet prints. But the great costs of making the plate and printing it meant that photogravure had no wide commercial application outside the field of luxury facsimiles. Even though it is likely that several thousand impressions were issued the survival rate of these large prints is surprisingly small. The only impression in a British collection is in the Victoria & Albert Museum, but it is not coloured. Although the hand-colouring on the present impression is not strictly speaking original, it is contemporary with the print. Most were coloured immediately after they were published (and the quality varies considerably!) The colouring on this impression has been skillfully and sensitively executed. It is also in its original frame and therefore an important document of contemporary taste and display.

Unknown , after Sir Edward Poynter
The visit of the Queen of Sheba to King Solomon

Unknown
after Nicholas PoussinBacchanal before a herm circa 1800166.1979
View all
143 works

Browse other works by after Sir Edward Poynter

Leon Girardet
after Sir Edward PoynterThe Queen of Sheba visiting the court of ... circa 18904655