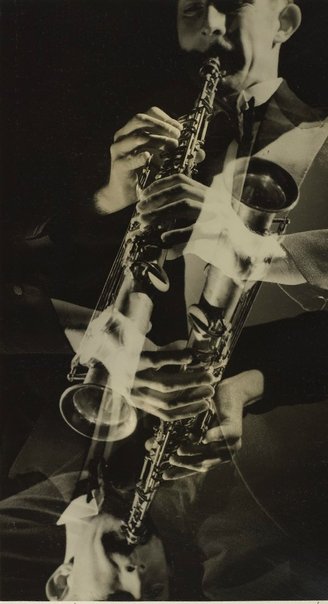 ‘The saxophonist’, from the album ‘Max Dupain photographer’, is one of a number of photographs which Dupain would have kept together to show the best examples of his commercial work to his clients as well as to keep a record for himself. Other photographs in the album include fashion, industrial and home wares and there are several examples of photomontage and double exposures. In the mid 1930s Dupain had seen the work of Man Ray for the first time and was enthralled with the American’s virtuosity. Dupain had also been looking at the work of László Moholy-Nagy and George von Hoyningen-Huene. In these years Dupain published a number of photographs in ‘Art in Australia’ and ‘The Home’ which acknowledged the influence of Man Ray.1 The spread in ‘Art in Australia’ is especially limpid, including nudes, portraits and a double exposure of hands.2

In ‘The Home’ on 1 October 1935 Dupain had written a homage to Man Ray: ‘No matter what his subject matter may be, figure, still life, interiors, montage or landscape, his sensitive judgment enables him to control the elements of his design by the selection of viewpoint.’3 ’The saxophonist’ is composed rather like a playing card with the musician and his instrument montaged so that the saxophone creates a diagonal through the picture plane. The exhilaration of jazz music which exemplified modernity in the 1930s as much as skyscrapers, radio masts and airliners is made manifest here with the multiple hands and the complex forms within the image.