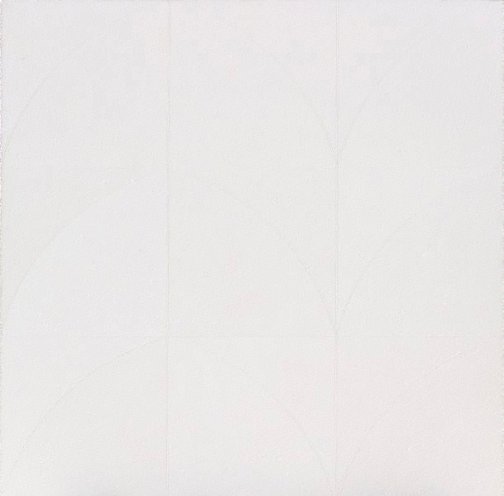 'Untitled (white series no 6)' was shown in Robert Hunter's debut exhibition at Tolarno Galleries, Melbourne, in May 1968. From the outset Hunter was a consummate minimalist, which is apparent in his work's economy of geometric shapes and white tones. Hunter was inspired by Ad Reinhardt's black monochromatic paintings from the early 1960s, which he'd encountered at the National Gallery of Victoria in the Museum of Modern Art travelling exhibition 'Two decades of American painting' in 1967. Evoking timeless forms such as the arch or mandala, the scarcely visible composition of 'Untitled (white series no 6)' is based upon a grid format that has been offset by curvilinear lines.

Hunter briefly abandoned painting on canvas in 1970 and, like his other influence Sol Lewitt, he began working on ephemeral wall murals which foreshadowed the dematerialisation of the object and the emergence of conceptual art in the 1970s. By the 1980s Hunter had returned to painting on traditional supports, but continued working within the parameters of the white monochrome and the grid.

Browse other works by Robert Hunter