Untitled (self portrait), from the album Photographs by Max Dupain 1930s 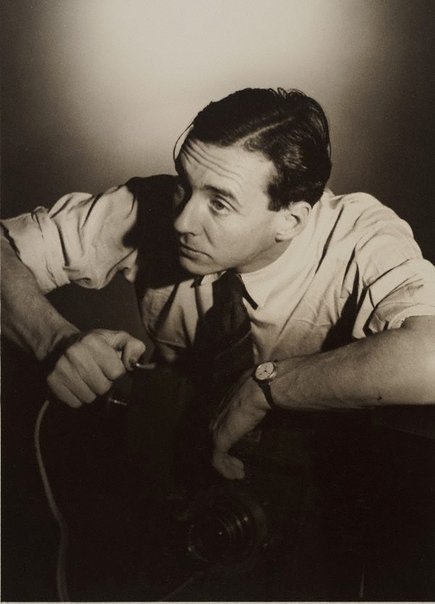 This engaging self-portrait by Max Dupain was kept by the artist in an album of photographs from the 1930s. The album was possibly a workbook which would enable Dupain and his clients to review his career as a young modernist photographer. Dupain had opened his own studio in 1934 at the age of 23 having previously been apprenticed to Cecil Bostock and studying painting and drawing at the Julian Ashton Art School in Sydney. In his teens, through the Photographic Society of New South Wales, Dupain had also had contact with Harold Cazneaux whom he later described as ‘the father of modern Australian photography’.1 Both Cazneaux and Bostock provided Dupain with a solid technical and aesthetic base from which to work.

The young working photographer has chosen to depict himself in ‘Untitled (self portrait)’ with rolled-up sleeves and a furrowed brow. The image is bisected into light in the upper half and dark below with the photographer’s right hand pressing the cable release. Looking away, in three-quarter profile, Dupain is engaged with something out of the frame. The dynamism of the image is further enhanced by the bent arms and the strong shadow of Dupain’s profile.

The 1930s was a period of intense experimentation for Dupain as he applied the lessons learned from Bostock and Cazneaux and absorbed the material in international publications. He mastered solarisation, montage, portraiture, interiors and advertising photography. His interest in form and composition matured. His dedication to his work is manifested in this image.