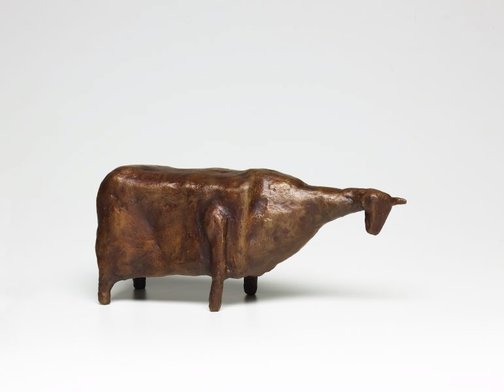 John Kelly is a painter, sculptor and printmaker whose work reflects his interest in Australian art history and visual arts culture. He is best known for his series of paintings and sculptures of cows. Kelly's cows were inspired by those of William Dobell, who, during the Second World War worked as a camouflage artist for the Department of the Interior. Dobell built papier-mâché cows which were used at airfields at Sydney’s Bankstown aerodrome to disguise the area as farmland, concealing its military function in the event of enemy aerial reconnaissance.

Inspired by the story, Kelly developed a distinctive cow figure with a square body and a small head, a nod to Dobell’s infamous Archibald-Prize winning portrait of Joshua Smith which depicted a disproportionally small head. Smith worked with Dobell as a camouflage artist during the war. Kelly’s large-scale cow sculptures have been displayed around the world including Paris, Monte Carlo and London, and permanent sculptures are located at Melbourne’s Docklands and in Kelly’s hometown of Sunshine, Melbourne.

Browse other works by John Kelly