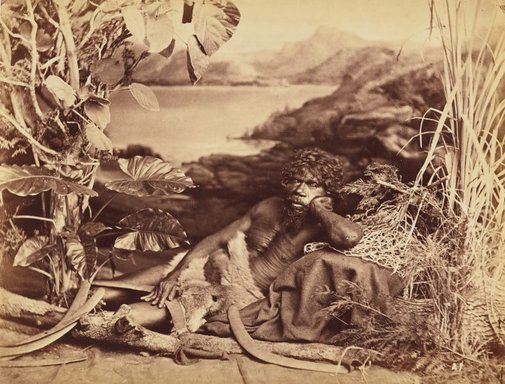 JW Lindt was a professional photographer and amateur ethnographer. Born in Frankfurt-am-Main, Germany, he arrived in Australia in 1862, where he worked initially as a travelling piano tuner and repairer in country New South Wales and Victoria. In the late 1860s he worked as an assistant in the Grafton photographic studio of Conrad Wagner. He took over as manager in 1868 and opened a second, more luxurious studio in 1870, producing portraits and views of paddle steamers, wool drays, sheep stations and local gold-mines.

In 1873–74 Lindt produced a series of studio portraits of Aboriginal people from the Clarence River area posed in elaborate tableaux against painted backdrops. Despite their obvious artifice, the photographs were considered ‘truthful’ likenesses and purchased by the government of New South Wales for presentation to museums in Britain. Within the history of anthropological photographs of Indigenous people in Australia – a history that is defined by the problematic and oppressive power dynamic of the colonial context – Lindt is unique for his commitment to an aesthetic agenda, not simply a documentarian or sociological one. In 1888 he wrote ‘My motto as a photographic portraitist has always been “Truth – but truth in a pleasant form” … I have always paid the greatest attention to the production of negatives as nearly as possible perfect in expression, lighting and pose.’

While the fetishization of Indigenous subjects on aesthetic grounds is itself an extension of the colonial project, more recent readings of Lindt’s photographs emphasise the individuality of the subjects and their often direct gaze into the camera, arguing that the poses are not always subservient despite the abiding resemblance between these staged scenes and the simulation of a museum diorama.