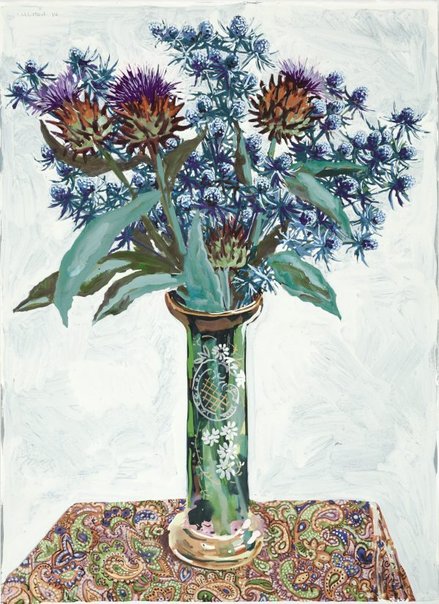 A recurring feature of Lucy Cullton’s work has been the arrangement of objects in still life compositions. In the late 2000s, several series of still life paintings (including cacti, light globes and knitted toys among other subjects), extended her earlier gridded compositions into more organic, bountiful arrangements within a flattened picture plane. Some recent still life works, such as the Bibbenluke flowers series (2012) are composed more conventionally; they show multiple flower-containing vessels - chosen for their shape and the way they reflect and refract light - arranged and rearranged on surfaces. Some of these surfaces are covered in patterned fabric, acting as counterpoint to the vibrant blooms above.

These gouaches relate to an earlier series of oil paintings ‘Bibbenluke flowers’ 2012 (see Lucy Culliton, Bibbenluke flowers Sydney: Hughes Gallery, 2012) in which the artist’s love of flowers and her garden, and her urge to collect particular objects (bottles, vases), was revealed in exuberant still life paintings of objects and flowers arranged in a multitude of combinations. The gouaches were painted by the artist in late 2013/early 2014 at Bibbenluke, her home in southern New South Wales.

Browse other works by Lucy Culliton